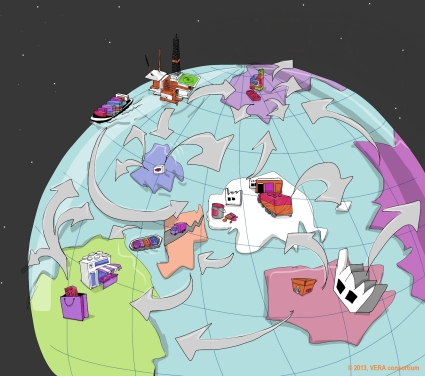 The driving force: In this scenario, the after-effects of the global financial crisis of 2008 are still being deeply felt. As a consequence, the variety of approaches to recovery have led to locked-in growing inequalities between countries and regions within the European Union. Recovery from the crisis, a new period of growth and the creation of jobs are the thrust driving political and private action. The value of research is mainly to serve the economy. Policy concerns: Public policy is therefore mainly concerned with boosting competitiveness. The consolidation of public budgets remains a major constraint. Public funding for research is limited and concentrated on basic research and future emerging technologies (FET). The Research and Innovation Landscape: The expenditure on research and innovation by companies and other private actors, in particular philanthropic organisations, far outweighs public spending. Private actors are thus, de facto, able to define research priorities. The research landscape in Europe is mainly influenced by knowledge-intensive sectors that are concentrated in the stronger, globally interconnected regions.  Here, research is carried out as a specialized, globally distributed activity. Also, excellent science is located in science clusters with fewer and larger organisations, mainly universities, providing a cutting-edge science base. In fact, this scenario appears to be the only one where the excellence paradigm remains untouched. European-level policies look quite different compared to 20 years ago. European Union bodies have established a regulatory framework supporting the innovation ecology with common structures for IP, standardization and public procurement. There are also coordinated approaches and collaborations among funding agencies, similar to the types of collaboration seen in the ERA-Nets, but more heterogeneous, involving national and regional public bodies and also NGOs. The number of states actually collaborating in such initiatives is rather small. Consequently, EU bodies have little to no power in setting research priorities or coordinating research funding. Addressing societal challenges: The re-sectoralization of European policies hampers coordinated approaches to societal challenges. However, societal challenges can still be addressed in this scenario, thanks to funding from philanthropic organisations, and public-private partnerships, or as the result of collective experiments bringing together concerned groups and local actors. Major concerns addressed are energy transition and health issues. Europe in the world: International and global agreements about framework conditions, e.g. for IP or standardization, are pursued by the European institutions whenever these are perceived as advantageous to the interests of European corporations.

In the attached report we explore the implications for the research and innovation landscape, read the extended scenario text on pp. 14-19. From this extended view, we derived a set of key institutional and policy features:

5- Supporting scientific research in a reduced number of outstanding research universities, through European funding agencies like the European Research Council.

8- Agencies in charge of specific aspects of STI (like the European Research Council) are powerful within their areas of activity and operate with autonomy.

9- STI support policies are fragmented and implemented across all types of European institutions.

Other implications of the scenario

10- Concentration of scientific and technological capabilities around key science ‘clusters’ in Europe.

11- Dualisation of Universities, with a vast majority focusing on professional education (including life-long learning) and a small group of research-led elite universities.

12- Public sector STI support is limited and fragmented. Diversity of instruments, many of limited size and targeted to specific sectors or activities.

13- Support to SME’s innovation capabilities remains high in the agenda but given the budgetary constraints, interventions are channelled either through sectorial policies or through dwindling structural funds.

VERA scenario 1 “Private knowledge – global markets” assumed that a small share of public research is horizontally coordinated by clubs of EU Member States (MSs). Private actors like big corporations and lobby organizations, are assumed to be risk averse, and they have significant agenda setting power to align public RTDI activity to market interests. In the energy field this may lead to fragmented and ineffective governance of energy RTDI in MSs. As public intervention in general and the coordination by EU bodies are weak, private actors may pay attention to short-run competitiveness aspects of energy technologies and not to long-term needs of sustainable energy production and consumption system, resulting in possible tensions between assumption of short-term perspective made by Scenario 1 and EU´s long-term energy and climate change action plans. The public good and externality aspects of climate change, usually strongly among key arguments of public policy, may also be undervalued by actors in power in this scenario. In the worst case, in addition to tensions above, all these issues together may jeopardize attainment of EU´s strategic energy and de-carbonisation goals.

According to Scenario 1 worldwide RTDI is coordinated by non-state actors in vertical networks and value chains without hands-off coordination of vertical networks and value chains, which may lead to hard price competition among vertical chains and networks. Success and sustainability of RTDI of renewable energy (RE) depends on global customers, and for example the power of China as big customer may have significant influence on vertical chains RE RTDI and production. Moreover, the assumption of Scenario 1 according to which research directions are justified by the promise of successful commercial exploitation mainly by private actors, does not necessarily guarantee European or global public long-term interests and welfare aspects, accentuated in several FLAs in energy and climate change sectors. Short-sighted and risk-averse business logic may lead primarily to incremental solutions while sustainable energy technologies require radical long-term RTDI strategy and high investments to produce radical innovations.

Diversified research organization, as assumed in Scenario 1, may lead to excellent specialized individual RE-RTDI providers, but the arising threat is the insufficient coordination between individual providers, Joint Ventures, and public-private consortia, and finally fragmentation and competition between providers. Short-sided commercial expectations affect also the selection of researchers accepting such mind-set, and researchers with ethical and responsible mind-set will be laid aside. These issues have been raised in many EU documents and for example in recent responsible research initiatives by the EU. In the EU growth and job creation rationales are still valid, but the economic and other means for effective policies and for sustainable energy RTDI contribution remain limited. On the global level limited resources of Europe give room for expanding economies such as China and Brazil in energy related RTDI and in Europe growing inequalities lead to form “cliques” among economically stronger MSs also in R&D energy investments.

In conclusion, as the key assumptions of Scenario 1 are strong power and role of big corporation and private sector, and weak role of EU and lack of public coordination, consequences to the future development in energy and climate change become even predictable: Actions and evidently also RTDI in energy, climate change, energy efficiency, and related fields become more short-sighted. The short time horizon affects RTDI and, leads, for example, to incremental rather than radical eco-innovations which however the transition to sustainable energy future requires. The limited resources of the EU and fragmented European landscape due to “cliques” of MSs may make future oriented policies towards sustainable energy structure even impossible. On the global level Scenario 1 gives room for expanding economies such as China and Brazil also in energy technologies and related RTDI.